The Woes of Point and Shoot Photography

Day 1 – Wednesday: I located my point and shoot camera in a neglected corner of my desk with a stack of CDs, and two old Nintendo DSs that I have since abandoned for my 3DS. My camera has been tossed aside much like the old CDs and handhelds in favour of the various iphones I have owned in the past five or so years.

My camera is a Cannon PowerShot S5IS with 8 mega pixels. When I first purchased this camera six or seven years ago I was in love. It was exactly what I wanted. I had a well made digital camera that possessed tons of features without having to upgrade to (or pay for) a SLR. Now, despite the fact that it still takes great photos and works perfectly, I almost never use it. The camera only comes out during vacations, trips and holidays, and even then I still favour my iphone because I am so accustomed to posting my photos instantly to Facebook, Twitter, and Instagram. I have chosen to not only try to take P&S photos this week but also to attempt to not take iphone photos or post things to Instagram. It is going to be tough.

I go to turn my camera on and realize there is not a single battery in the house. I would take the batteries out of something else, but there is nothing else in my house that uses double A batteries. Everything has it’s own individual battery and charger now. So I walk down to Shoppers Drug Mart and talk myself into buying the pack of 10 batteries, because the pack of 4 batteries is a rip off even though there is nothing in which to use them, aside from the camera. I also buy 5 boxes of Kraft dinner. When I get home I take some test photos in my office and try to remember how all the settings on my camera work but the lighting in my apartment is horrible and the flash makes everything look like a drug den so I give up.

Day 2 – Thursday: I get ready for class and grab my camera so that I will have it for the day. I quickly realize that it will not in anyway fit in my laptop bag. Because it is a solid 4 inches x 4 inches and my laptop bag contains many “sleeve” like compartments my camera is impossible to fit in there. Just for laughs, I take everything out of my bag and try to fit in just the camera. It fits but just barely. I am about to be late at this point, so I grab a second bag for my camera and put everything else in my laptop bag. I feel really stupid carrying a big “University of Waterloo Bookstore” bag with only a camera in it, so I start filling it with things around the house I might want while I am at school for the day. I may be bogged down with two bags, but I do pack lunch for the first time all semester. Thanks camera.

Arriving at campus I start to wonder what the hell I am going to take photos of. I look for some geese since I caught a few with my iphone last week, but they all seem to be photo shy today. I am suddenly nervous that my students will see me and think I am incredibly old and weird, so I head into my office. Since I am going to teach my tutorial today and I assume it is against university policy to take photos of my students I decide I will just take a few photos of the office instead.

Day 3 – Friday: I worked at home all day and did not go anywhere or do anything. I felt guilty every time I looked at my camera sitting next to me so I took a few pictures of strange things around the house. This was sort of fun because I wasn’t having to take the big heavy camera to a specific location to take photos. There were a few times that I was extremely tempted to take a photo or two for instagram/twitter/facebook, but I can’t for the life of me remember what I wanted to photograph now. What I do remember is being too lazy to take those photos on my P&S camera and upload them to my computer and then to FB manually. WAY too much work. 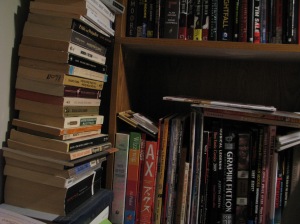 Day 4 – Saturday: I get up early and get ready to go to the Kitchener Farmer’s Market. When my partner and I are out the door he turns to me and asks “do you have the camera?” I cringe and unlock the door, grab the camera, toss it in his backpack and forget about it. When we arrive at the market I fish out the camera and look around for photo opps. Unfortunately, the market is so packed that I feel guilty and awkward enough standing still just to buy vegetables let alone standing in the way to take a photo. At the Kitchener Market people are always trying to bust past you to get their pea shoot fix or alternatively they are patiently waiting behind you so that they can get their turn at squeezing a bunch of avocados that no one is going to buy. Either way, I feel like I should never be standing in whatever spot I am inhabiting, so I follow my partner around nervously while he buys vegetables and I don’t take any photos. No matter where I was standing or walking I felt a bit on edge and nervous so other than snapping one quick photo of some mushrooms I mostly kept the camera tucked underneath the tomatoes in my shopping bag. Before leaving I considered taking some photos of some squash in a mysteriously empty corner of the market but I felt awkward and pretentious breaking out the huge camera so I just … don’t. 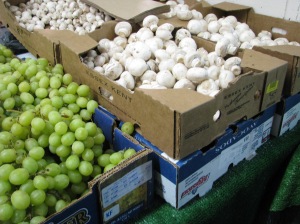 After we ate lunch I decided I could take a few photos of the market from the balcony of the upper level and that way I won’t be in anyone’s way. So I left my groceries and coat with my partner and quickly took a few overhead snapshots. A few people gave me nasty looks, presumably because they thought I was a tourist. For the first time since moving here I really wanted to assert that I do in fact live in Kitchener.

Later on that day I accompanied my mother to the Apple store to buy an ipad but had no desire to take photos of anything I saw in the mall. Despite going out and eating a tasty dinner I did not photograph it as I usually would. I knew my camera was in my purse but I just had no desire to photograph my food without the instant satisfaction of uploading it to instagram. I watched enviously as my mother photographed her plate for her blog and I munched my unphotographed dinner.

Upon returning home from dinner I realized that I had already accidentally broke my own rule about iphone photography! When my mother arrived at my apartment, she had brought with her my new winter boots which I excitedly put on and photographed. I was so completely excited to finally own my dream boots that I had uploaded their visage to Instagram, facebook and twitter without even remembering my “no iphone photos” rule. Oops.

Much later that day I headed to a late night coffee shop to grade some essays. I picked up my camera with every intention of bringing it with me but quickly realized that I would have to again bring a second bag. “Enough of this!” I shouted. And that was the last of my photo taking adventures.

Day 5 – Sunday: Today I sit and reflect about what photography has come to mean for myself. I take photos on my iphone constantly but I almost always share them instantly, if not through one of the aforementioned social media sites then through text messages. When vacationing in Niagara Falls this September my partner and I took hundreds of photos. Almost none of which have been shared with others. We each plucked a profile photo from the batch and that was that. I didn’t look at them once until breaking out my camera for this project. I am not sure how I feel about this experience but I can tell you one thing for sure: I am going to Instagram the HECK out of tomorrow.

I am a PhD candidate at the University of Waterloo who is writing a dissertation about pornographic comics. This blog is for updates about my research as I progress though the PhD.
View all posts by Emma »
« Shooting Film Takes Time … To Be Continued
Hipstamatic: Retro Photography for iOS »

2 thoughts on “The Woes of Point and Shoot Photography”