Rage comics/faces originated in 2008 on 4chan’s famous /b/ board with the rendition now known as “rage guy” or “FFFFFFFUUUUUUUUUUUU”. This first rage face was most likely created in MS Paint, but as the tradition grew comics generators appeared in which anyone could easily create a rage comic using a variety of templates and traditional “rage faces” with little to no MS Pain or Photoshop skills. 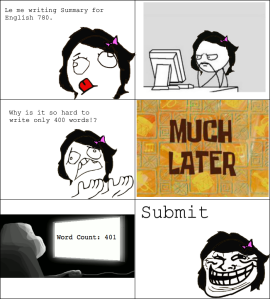 These comics most typically illustrate an everyday situation that ends with a funny or satisfying punchline that is usually indicated through one of the various rage faces or one of their typical tag lines (For example: FFFFUUUU, Problem?, Derp, Me Gusta, Forever Alone) in order to create a secondary relevence that relies at least somewhat on a cultural understanding of the meaning that has been embedded into the face(s) being used. Often times the meaning of the faces changes due to the context in which the comics are created and shared. The context that the comics are shared in changes how “relateable” the comic is and how much the reader is likely to empathize with the situation.

The spread and cultural impact of these comics is believed to have been increased because of the “FFFFFFFUUUUUUUUUUUU” subreddit which encouraged users to submit their rage comics. Know Your Meme claims that this is where many of the features and characteristics that we now associate with Rage Comics were developed.

Rage comics can be more broadly understood by examining the tradition of “rage faces”. Each face acts as a sort of malleable character that inhabits not just comics but also many other types of memes as well as a presence in avatars photos, youtube videos, forum posts, and general internet culture. Many of the rage faces have a textual association that goes along with the face. This includes the convention of beginning a sentence with “Y U NO” when confronting a problem or using the words “derp” “herp” or “derping” at any point in the sentence to convey silliness or stupidity.

Other textual associations are more like taglines and may or may not accompany the face. For example when using the “forever alone” face to conclude a comic one understands the implication that the words “forever alone” are insinuated even if the phrase itself is not included. The most famous example of this would be the “troll face” which is often, but not always accompanied by the tagline “problem?” 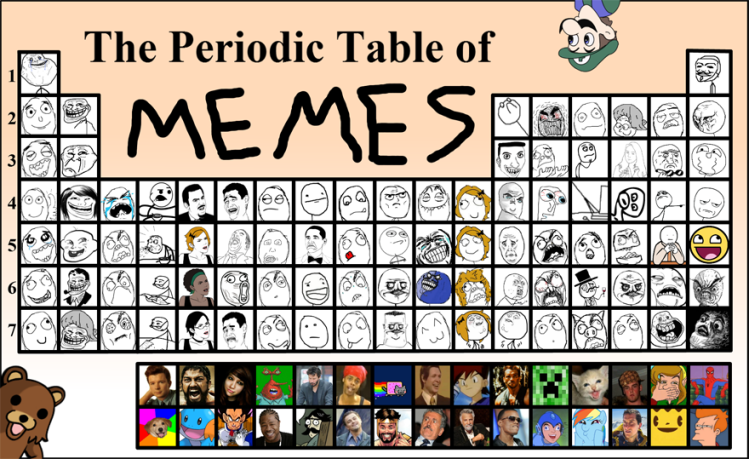 I am a PhD candidate at the University of Waterloo who is writing a dissertation about pornographic comics. This blog is for updates about my research as I progress though the PhD.
View all posts by Emma »
« Summary: Bronies in the Press
Summary: Brony Memes and Social Activism »