My Little Pony is a series of toy ponies initially intended for girls, and first introduced in 1981. Since then, My Little Pony has grown beyond toys—it has created games, movies, even  a television (TV) show. The TV show My Little Pony: Friendship is Magic was created and intended for little girls, however, its fan base has grown to boys, as well as grown men who appreciate the show for its messages about harmony, acceptance and peaceful living.  Fans of My Little Pony that are grown men, identify themselves as bronies, and have created several brony memes (memes about My Little Pony) to celebrate their passion for My Little Pony.

Brony memes are incredibly popular on the internet and the reason for this is that they function as transmitters of culture because they illustrate a type of social activism by challenging what constitutes masculinity. Brony memes are created by, and intended for all kinds of audiences, which includes girls, boys, men and women. These memes push social boundaries because they challenge the perception of what is supposed to be masculine and feminine by creating a meme fanbase that is inclusive of males. Brony memes exemplify that cute, pink ponies are not just of interest to girls, but boys as well, and also grown men, and women.

Furthermore, brony memes work as a genre because My Little Pony is a recurrent image in brony memes. Brony memes are a social need for bronies because it is a mode of entertainment and social activism for them.  It is this social need, this exigence, that calls brony memes into production. That said, the producers of these memes are bronies who are looking to entertain other bronies, and also assert their freedom of choice, through a shared interest.  Brony memes construct a community where bronies can get together and self-present without judgement. Memes are social powerful tools because they allow bronies to express their interest in My Little Pony without being judged because it is seen as funny. Memes, as a larger genre, are defined by comedy and entertainment because they function to make people laugh and entertain them.  That said, brony memes specifically, are able to demonstrate social activism by challenging gender stereotypes, and escape criticism because the meme genre permits this. 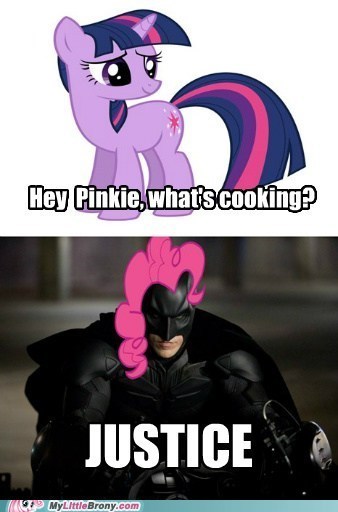